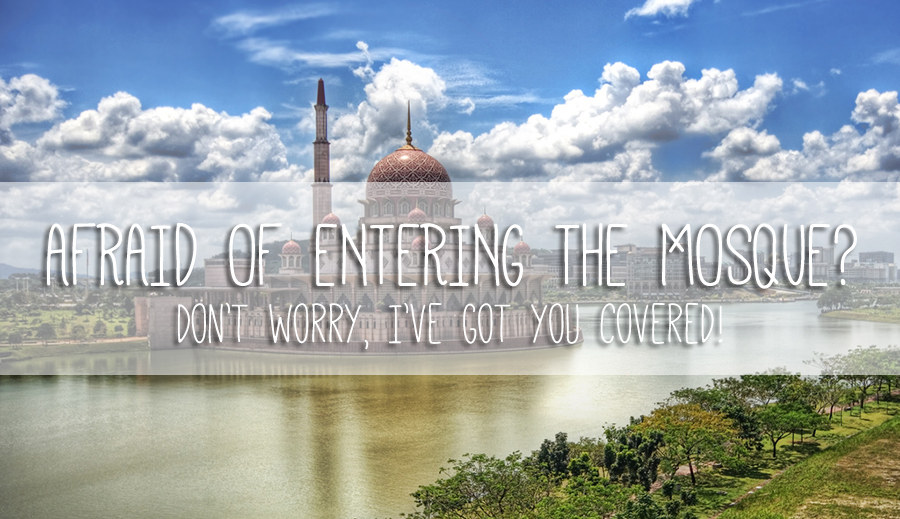 I remember the first few times I reentered the masjid after years of avoiding it. I was literally lost in all sense of the word – from finding the way to the wudhu’ area and the prayer hall, to being flat-out confused as to why everyone prayed two rakaats for Maghrib as opposed to three*. The fact that a pakcik shouted at me to put on a hijab did not help either (but more about that later)!

Entering a new territory, or even trying something new, takes lots of courage. We are forced to leave our comfort zones and enter the ‘great unknown’, a space filled with doubts, questions and loads of fear. I’ve been there, so I really honest to goodness, know how it feels.

Recently, I spoke to a sister who wanted so much to enter the masjid, but her fear stopped her. And because I am here in Malaysia and I cannot physically be there to accompany her, I have compiled together a very brief guide to masjid customs (as according to Singapore & Malaysia). My hopes are that insyaAllah your ‘great unknown’ will be reduced, even by a little.

This guide is by no means comprehensive, but insyaAllah, it will be enough for you to start making that first step into the house of Allah SWT. May all of us benefit!

1. The azan (call to prayer) signals that the time for a specific fardh prayer has arrived

Fact: Each row of prayer is called a ‘saf’.

2. Once the azan is over, most of the congregation will start performing their sunnah prayers

A sunnah prayer is not a compulsory prayer, but an additional prayer done by the Prophet SAW. However, there are specific sunnah prayers with different rakaat done at different times of the day:

3. After a short while, the ‘azan’ will be heard again

Notice however, that this time, instead of repeating the phrases twice, the bilal (the man who recites the azan) will only recite it once. This second ‘azan’ is actually called the Iqamah, and it signals that congregational prayer is about to begin (you will start seeing people shuffling to the front saf).

Fact: The term ‘bilal’ actually comes from the name of the companion of the Prophet SAW, Bilal Bin Rabbah, who was the first ever in history to recite the call to prayer.

You made it this far, Alhamdulillah! At this point, I understand that sometimes its hard to remain focused during prayer when you don’t understand a single word of Arabic.

The next time you are in the train on the way to work / school / holiday etc, open up that iQur’an app on your phone, and learn the meaning of the first verse of Al-Fatihah by heart. Slowly increase your understanding, verse by verse, day by day. There is nothing like prayer with understanding, alhamdulillah

Fact: The Imam will recite the verses aloud only during the Fajr, Maghrib and Isya’ prayers

After saying the “Assalamualaikum”s once the prayer is over, the custom here in Singapore/Malaysia is that most Imams will start reciting a du’a with the congregation. However, some Imams don’t.

Additionally, you might notice some people actually leaving the saf during or after the du’a, and starting another set of prayers. Just like there are sunnah qabliah prayers, there are also sunnah prayers after the fardh prayers (which are called sunnah ba’diah).

These too would vary accordingly depending on the fardh prayer:

Once you are done, spend some time just soaking in the atmosphere of the masjid, use it to reflect and have conversations with Allah SWT, and don’t forget to leave a small donation before you go!

Fact: All mosques in Singapore are asked to be financially self-sustainable, which means that your small donation actually helps a lot in paying for their bills and whatnot.

Remember I mentioned in the introduction I got shouted at by a pakcik due to my improper dressing? I forgot to mention that he did it from the first floor of the masjid, whilst I was on the second floor, in full view of the entire masjid.

I entered the masjid wearing a pair of t-shirts and jeans, and had the mindset that the masjid and community should actually welcome the youth in all manners of dress. After all, isn’t it good enough that the youth actually want to enter the masjid?

What I failed to realise is that there is a proper time and place for everything. When we meet our boss at work, we are expected to dress in office attire. When we visit the Minister or Sultan, we are informed to put on formal wear or risk being turned away. So why do we feel like it’s perfectly fine to ignore the dress code when we want to enter the house of the King of kings?

A loose cardigan and a shawl wouldn’t take much space in your bag, and they take all of ten seconds to put on prior to entering the masjid ;)

I hope this short guide to Masjid customs benefit you, and Alhamdulillah, inshaAllah everything up there is sahih (correct) as it has been checked and approved by an ustadhah I know. Remember that the first step is always the hardest, but as the Prophet Muhammad s.a.w. says,

May Allah swt make our change easy for us, and may He keep us on His deen, and gift us the blessings of determination, courage, and patience to change ourselves for His sake. Allahumma ameen!

*The reason  people prayed two rakaats for Maghrib prayers was actually because they were not praying Maghrib! They were praying the sunnah prayers heh silly me.