For close to two years, I have been attending a weekly halaqah under SeekersCircle. Entering my fourth year of studies, unavoidable schedule clashes cropped up and I had to, very unwillingly, say my goodbyes to my newfound family. Two weeks ago was my last class, and this is my tribute to the Circle that has affected my life in countless ways.

If anyone were to question Islam’s relevance to man across all ages or colors, a short visit to the Kuala Lumpur’s branch of SeekersCircle would prove enough of an answer.

The circle has recently grown to encompass a Palestinian, an Indian, a Swiss, an Arab, a German, an American, a Brit, two Indonesians, several Singaporeans and well, several Malaysians. (Oh, and a Persian cat named Tito who holds the undefeated record for best attendance.)

For the rest of the week, the Circle’s members are professionals, grandparents, students or superheroes fighting for world peace, but come Friday night, all of them would gather together under the roof of 88 Lorong Burhanuddin Helmi and transform into seekers of knowledge.

They would settle in front of the ceiling high projector, and wait earnestly for the screen to warm up. Seconds later, the wide smile of Imam Afroz would fill the screen and the lecture would proceed amidst the delicious smells wafting from the dinner table.

This was definitely not the case a year and a half ago.

When the first KL Circle was formed, there were just eight of us. Imam Afroz spoke from behind a far smaller television screen, and the Internet connection had a habit of skipping classes. Other times, the streaming would get muddled and we had to listen to the Imam repeat everything he said every minute or so. Reminders are good, but three hours of watching the Imam freeze every few seconds in humid Malaysian weather?

Nevertheless, we sat through. Not just for that one class, but for the entire semester. Then we signed on for another, and another. With the beginning of each new semester, we would welcome new faces into the family and soon enough, almost each square feet was filled with either a person or a yawning Persian cat. 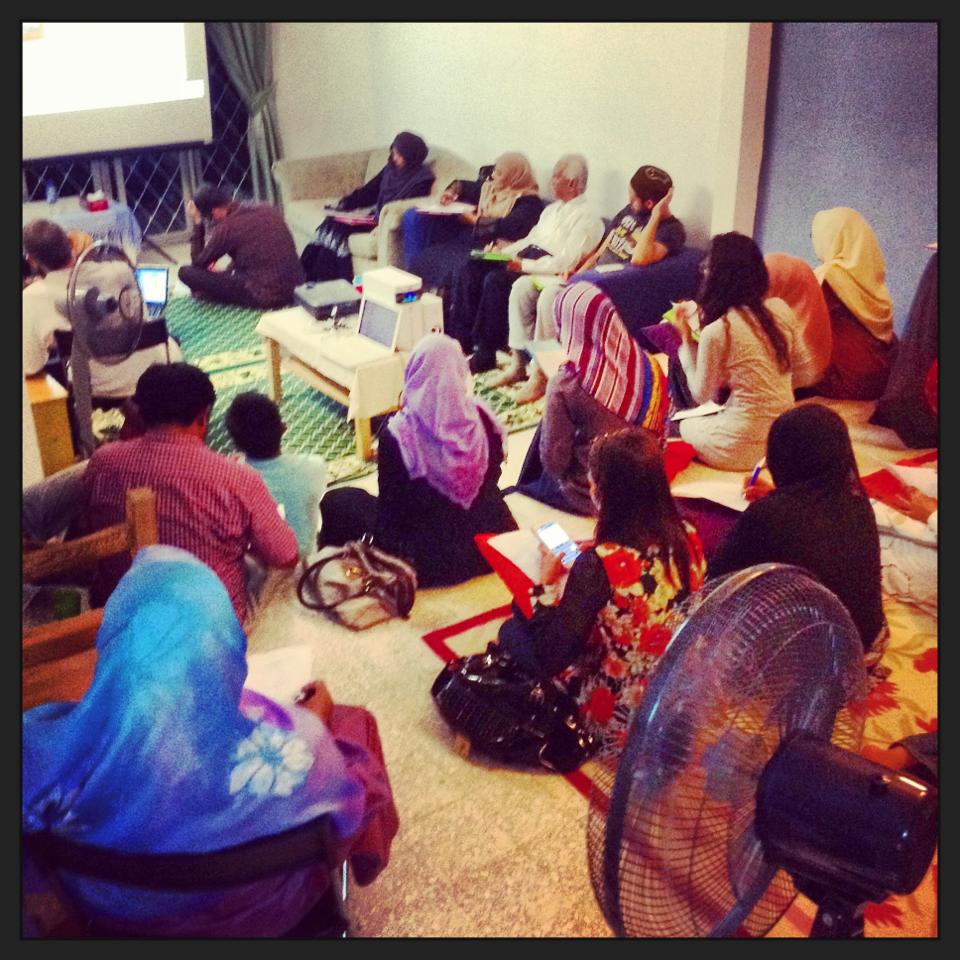 Without doubt, Friday nights became the special of the week – a delightful serving of beneficial knowledge, great company and good food.

Reflecting on the many changes that the KL circle had gone through the past year and a half, it struck me that the reason I persevered on despite the teething issues was because the circle had in fact changed ME.

My favorite grandmother from the circle, Aunty Omme, summed up the lessons taught during SeekersCircle perfectly when she said, “I was brought up knowing Islam as what my parents had taught me, which is the ritual aspect of the Deen. However, when I began attending the Circle, I learnt that Islam is much more than that.”

The lessons – explanations and elaborations of great books like the Ihya’ of Imam Al-Ghazali – required the full attention of our minds and the full reflection of our souls. Even from Perth, Canada or some hotel in God-Knows-Where, the counsels and lessons from Imam Afroz and other esteemed Seekers Guidance teachers like Syeikh Faraz Rabbani or Syeikh Yahya Rhodus reached close to our hearts.

Every lesson was like having your entire lives ripped opened and laid out on the floor. Either you render yourselves blind or face up to all your dirty secrets.

As my fellow Circle member, Nursuraya, puts it, “The lessons made me reflect on who I really am, what beneficial actions have I done, and if all of the knowledge I have learned throughout the years have been put to good use.”

However, it was not just the lessons that had the pull of a rare-earth magnet. It was, also, being surrounded by a whole group of individuals who are outstanding in their characters, in their professional careers, and most importantly, in their thirst to seek knowledge.

Take Aunty Omme and her husband, for instance. Despite their old age and less than strong bodies, their spirit to learn and understand the Deen propels them to make their way to 88 Lorong Burhanuddin Helmi every single week, rain or shine.

Or Hamzah, the eight year old boy who could not understand the lecture but sits behind me with a Yaseen track on replay because he wanted to memorize it.

It would of course be incomplete to not mention Brother Amran and his wife, Sister Lina, the hosts of KL SeekersCircle. My gratitude to them for the countless things they did for the Circle are unsurmountable – the sacrifices, the time, the sweat and the money coming out from their own pockets – only Allah swt can reward them adequately.

From the minute I step foot into the kitchen to help prepare dinner, to the actual lesson via online telecast and to the hearty round of passionate discussions that follows suit, every single moment that I am around these role models inspires me to become a much better person tomorrow than who I was today.

Islam was sent as a guidance to mankind – from Palestine to India, from Germany to Malaysia – and to mold them to become the best of peoples with true knowledge. It was sent to build a community of peoples under the banner of Tawheed, who are constantly improving themselves and benefiting the lives of those around them.

In these aspects, the SeekersCircle program has definitely succeeded in becoming catalysts for the Deen.

May Allah swt reward our teachers, forgive them for their errs, increase them in their understanding of the Deen and grant them good health. May He fill the SeekersGuidance programs with barakah, and make it easy for the foundation to grow and prosper.

Last but not least, may He open new doors for me to continue my journey in the SeekersCircle program one day. Ameen!

P/s. Aunty Omme, the UIA girls miss you too. InsyaAllah we will meet again when the semester opens :’)

P/p/s. SeekersCircle is available all around the world! To check for your local Circle or to set up a new Circle, please read more about the programme here.

My name is Nur Fadhilah Wahid. I am a seeker of knowledge, a Muslimah in progress, and a writer. I believe in the magic that can happen when like-hearted and like-minded individuals come together :)

3 thoughts on “My Tribute to SeekersCircle (KL)”